This Page is dedicated to our Heroes. You wont find any sports stars here. This page is reserved for the men and women who more than six decades ago volunteered to serve this country. We, as citizens of this country, owe our Veterans a debt of gratitude that we will never be able to repay. Thank a Veteran and WE WILL REMEMBER THEM. 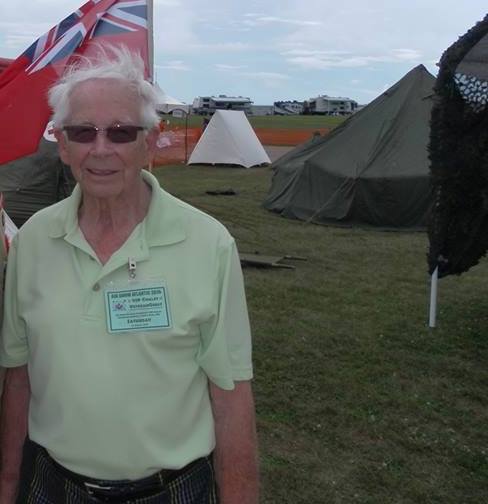 James Burleigh . Served as a navy Steward 1944/45 at the base where the WRENS trained in Kingston Ont. then finished his service in Cornwallis. 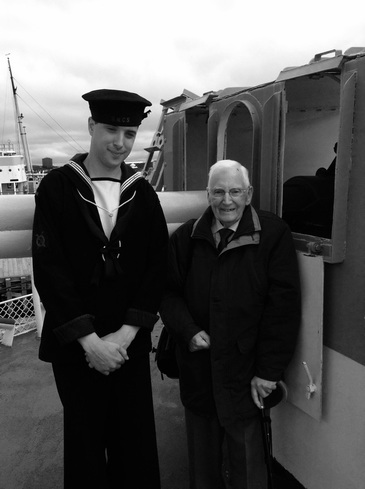 While volunteering on HMCS Sackville, the only remaining WW2 Corvette, young David met Mr. Sid Hill. Mr. Hill joined the Royal Navy in 1942 at the age of 16 and served on board HMS Verbena, a Flower Class Corvette. Mr. Hill remained in the RN until 1948 serving as a Petty Officer in charge of stores and supply. When at action stations his position was at the depth charges. During WW2, Mr. Hill served mainly on convoy duty in the North Atlantic and the Murmansk run to Russia. 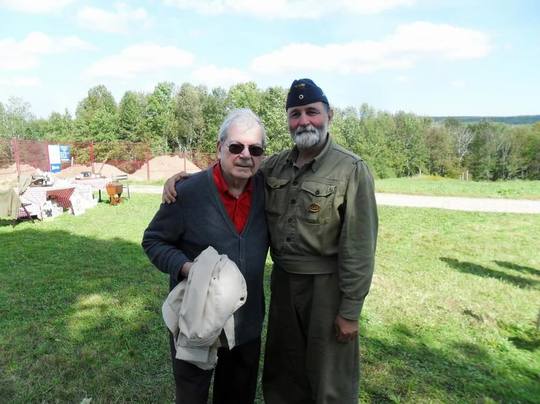 Bern with 91 year old Wallace Parsons at the  New Ross encampment 21st Sept., 2014. Mr. Parsons served in the RCN during WW2 as a coder on the HMCS Wallaceburg J336, an Algerine class Minesweeper. The ship performed escort duties, which included patrols in the waters between New York NY, St. Johns NL and Halifax NS, an area known as "The Triangle". While serving on the Wallaceburg, Mr. Parsons had the opportunity to work on a captured 4 rotor M4 Enigma cipher machine, which was used primarily by the U-Boat arm of the Kriegsmarine {German Navy}. During his brief conversations with Association members, Mr. Parsons grinned as he jokingly claimed that the HMCS Wallaceburg was named after him. A true testament to the wit and wisdom of Canada's Veterans. 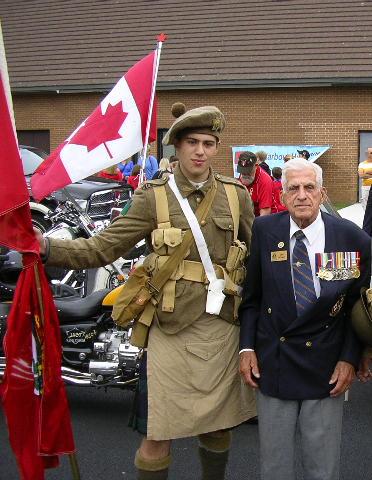 Harrison has his picture taken with Mr. Leo McTaggart at the Cole Harbour Heritage Parade 6th Sept., 2014. Mr. McTaggart joined the Royal Canadian Navy in 1942 and served on various corvettes. Following the war and after demobilization, Mr. McTaggart served as a seaman shuttling ex-RCN corvettes to various private buyers around the world. At the start of the Korean War, Mr. McTaggart rejoined the RCN and served on destroyers off Korea. He stayed in the Navy and served for 28 years. 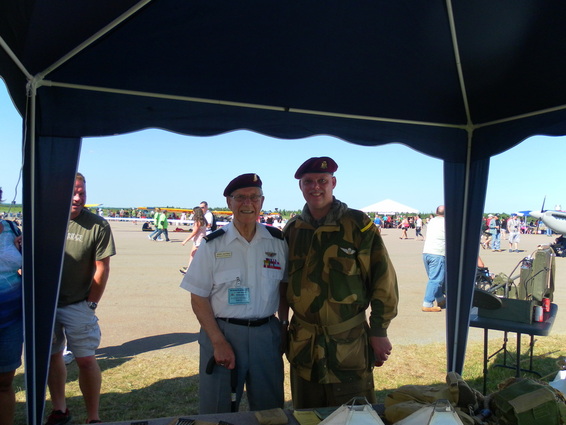 Keyan Noble has his picture taken with Mr. Joseph Gautreau at the 2014 Atlantic Canada Airshow in Moncton NB. Mr. Gautreau joined the Canadian Army in 1943. He jumped into Normandy, France, on D-Day, June 6th 1944 with the 1st Canadian Parachute Battalion. He left the military in 1946 only to rejoin again in 1947. He served until 1972. 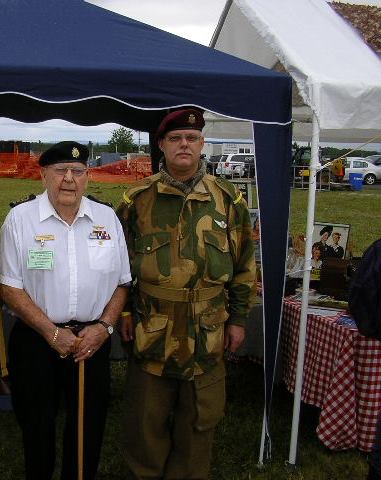 Keyan Noble stand with Mr. Steve Hutchinson at the 2014 Atlantic airshow in Moncton NB. Mr. Hutchinson joined the Canadian army in 1943 at the age of 16. In 1945 he was transferred to the Service Corps. Following the war he served with the Airborne. During the Korean War he again served in theater with the Service Corps. He retired from the military in 1966. 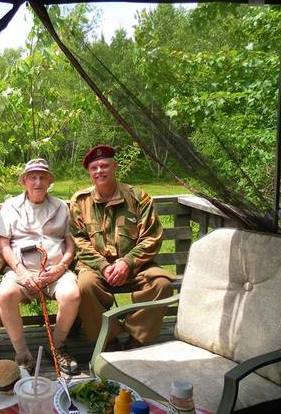 Keyan sits with Sidney Gould. Mr. Gould served in the Royal Navy during WW2. Following the war he served as a police officer in London. In 1954 Mr. Gould and his wife moved to Canada where he joined the Royal Canadian Navy. He retired from the RCN in 1972 having served as Captain on three ships. 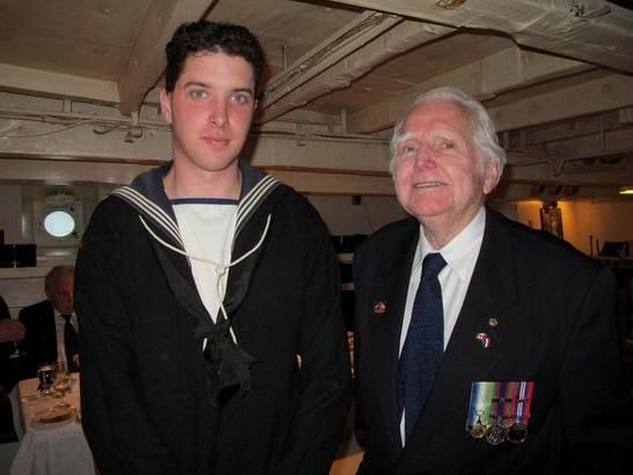 Dave has his picture taken with Mr. Lou Howard at the 2014 Battle of the Atlantic Ceremony. Mr. Howard served aboard the Bangor class minesweeper HMCS Sarnia as a navigation officer. On April 16th, 1945, HMCS Sarnia was supposed to link up with HMCS Esquimalt, however HMCS Esquimalt never arrived. She had been torpedoed by U-190 earlier that day and went down with the loss of  44 of her crew. 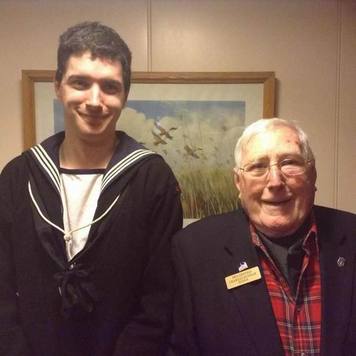 David Harrison has his picture taken with Mr. Charles Dunbar. Mr. Dunbar served on the HMCS Chicoutimi as a sailor in the RCNVR late in WW2. 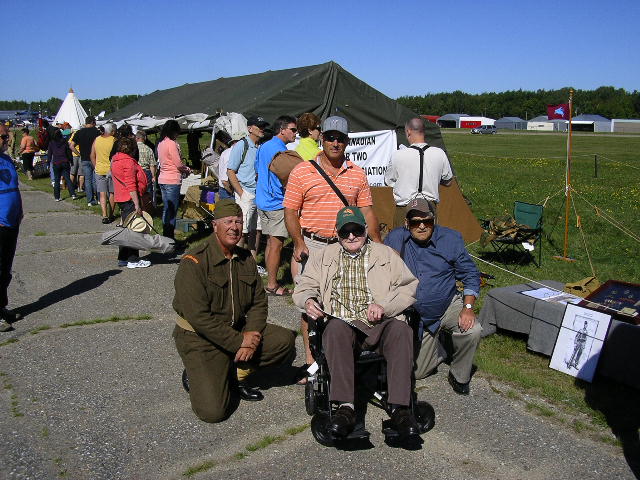 One of our members has his picture taken at the 2013 Atlantic Airshow in Chatham NB with Mr. Richard Quann. G4243154  L/Cpl Quann served as a drummer in the Regimental band of the North Shore Regiment. 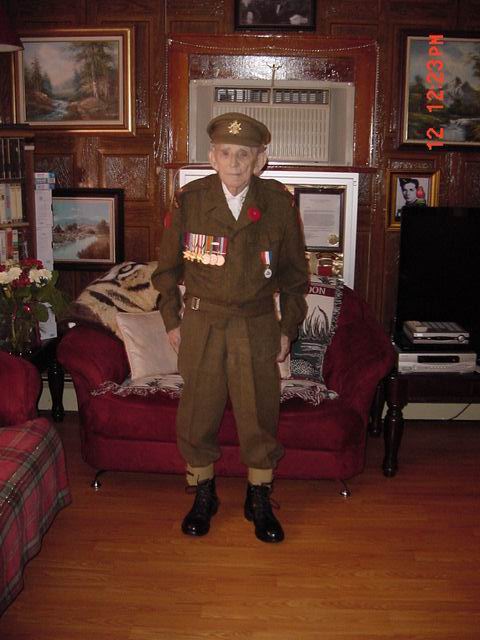 WW2 West Nova Scotia Regiment  Veteran Mort "Dunkirk"  Beazley dressed in the uniform presented to him by the Association on his 95th birthday Nov. 11th, 2012. 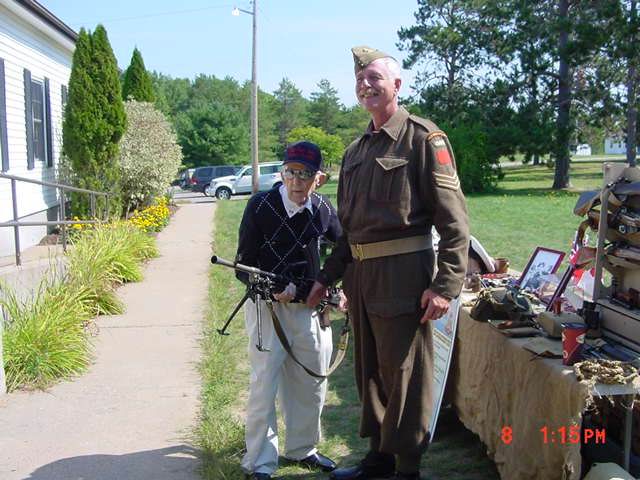 Pictured with one of our members is Cpl. Mort Patrick "Dunkirk" Beazley. Joining the WNSR in 1939, Cpl Beazley served in C. Company as a Bren gunner. Serving with the Regiment through the Sicily and Italian Campaigns, Cpl. Beazley was stricken with malaria and dysentry and had to be admitted to the hospital for several weeks. After recovering he rejoined the Regiment and remained with them through the rest of the war. Cpl. Beazley has authored a book of his experiences in the war titled "The Ravages of World War II- A soldiers story". If you would like a copy of his book, write to: M.P.B. Marketing, P.O. Box 58027, Mill Cove, Bedford, N.S. Canada, B4A 3Z2, or call (902) 832-9861. 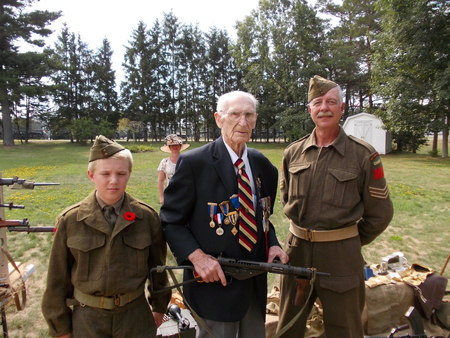 Pictured with members of the Association at the 2012 WNSR reunion is Mr. Robert Huntley. Mr. Huntley joined the WNSR at Kentville N.S., in 1940. Later transferring to the #11 Provo Co., he went overseas in 1942. Landing in Normandy on D+4, he served throughout North West Europe. 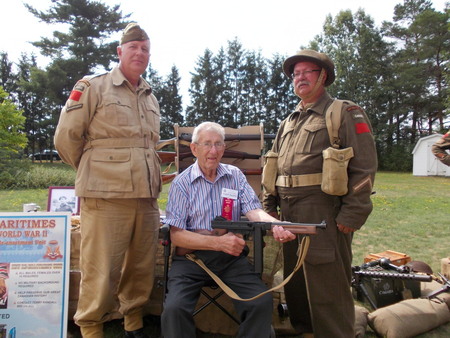 Pictured at the 2012 WNSR reunion in Aldershot N.S. is Cpl. Ernest Doucette. Cpl. Doucette served in B Company WNSR where he carried a Thompson SMG. Landing with the Regiment in Sicily, he was later wounded in action. 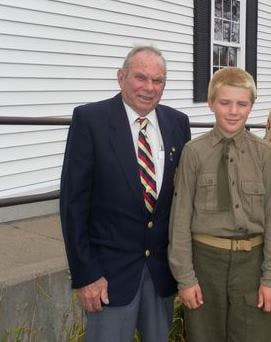 Noah with Mr. Hubert Sullivan at the WNSR reunion, Sept. 2012. 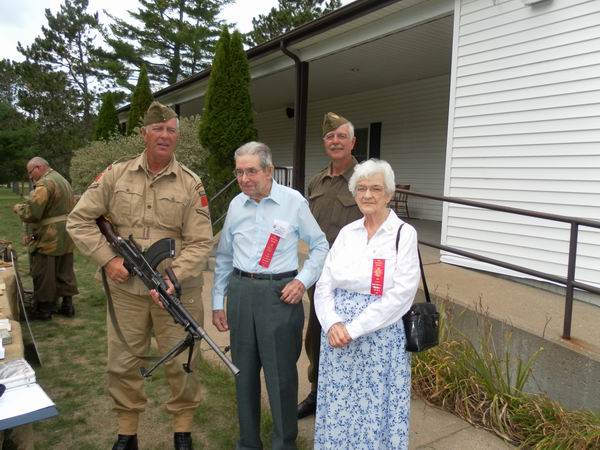 Pictured at the 2012 WNSR reunion in Aldershot N.S., is Pte. Garfield and Verbina Campbell. Pte. Campbell served as a Bren gun carrier driver in  the WNSR's weapons platoon. Joining the P.E.I. Highlanders he was transferred to the WNSR in 1940. They currently live in Bridgewater N.S.. 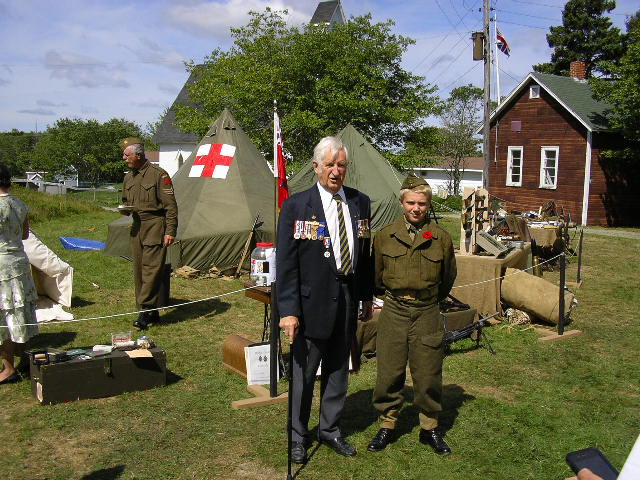 Cadet Noah Mills with Mr. Arther "Art" MacKenzie at the Heritage Village encampment and display, Sept., 2012. Mr. MacKenzie served in RCASC and was with  the 4th Canadian Division in North West Europe. 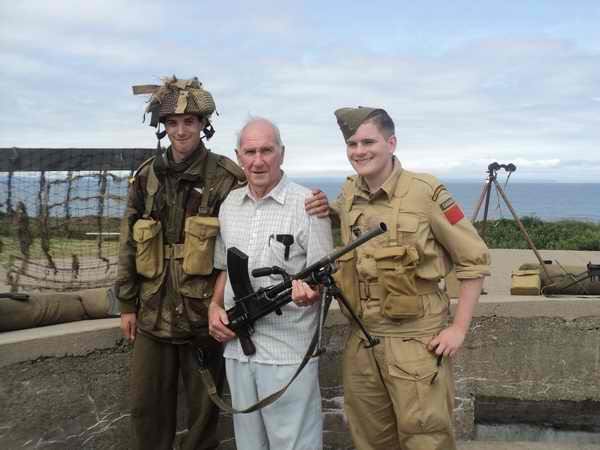 Dave and Liam have their picture taken with Mr. Leo Rose who served with B Company RCR in the Korean War.

Mr. Arther Pottle served as a Sgt. with the 1st Special Service Force. 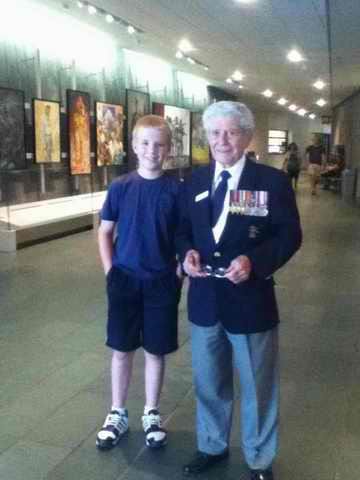 Association Army Cadet Noah Mills has his picture taken with Nelson Langevin a volunteer at the Canadian War Museum in Ottawa. Mr. Langevin served in the Royal Canadian Navy Commandos and fought in North Africa as well as at the Battle of Dieppe. 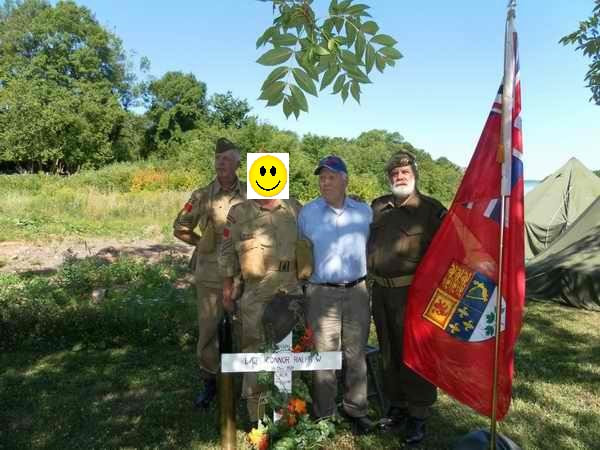 Sgt. Gavel (far left) and Sapper Avery  (right) stand with Mr. Herb Peppard at the Tatamagouche encampment, 21st July, 2012. Mr. Peppard was a Sergeant with the 1st Special Service Force (1SSF) in Italy and Southern France where he was awarded the Silver Star for gallantry in the field. Wounded, Sgt. Peppard spent 5 months in hospital. Following the disbandment of the 1SSF, Sgt. Peppard served with the 1st Canadian Parachute Battalion. 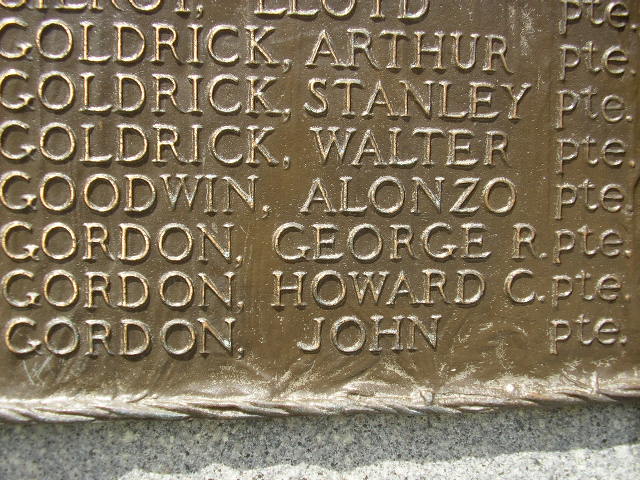 Recently at the 2012 Amherst encampment, during the ceremony at the Cenotaph, one of our members, Tpr. David Harrison found the name of his Great Uncle Rex listed among the fallen from the Great War. Pte George Rex Gordon from Oxford N.S., enlisted in the 193rd Battalion C.E.F. (Nova Scotia Highlanders). On arrival in England, his Battalion was broken up as reinforcements for the Royal Canadian Regiment. He was killed in action in late August 1918 just months before the end of the war. He was 23 years old. 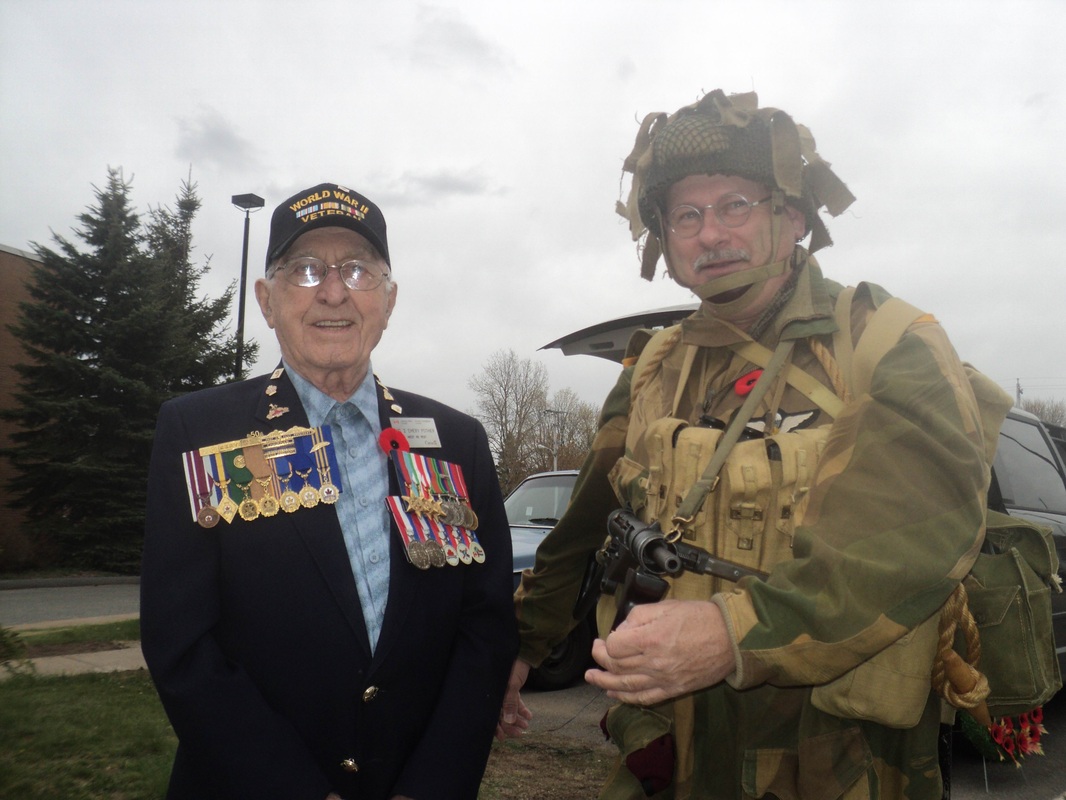 Association member CSM Terry Randall has his picture taken with Mr Emery Pothier.  Mr Pothier was the RSM for the West Nova Scotia Regiment at the time the Regiment fought in the Italian Campaign. RSM Pothier lived in Kentville and led the Kentville Remembrance Day Parade for years. He now resides in the Soldiers Memorial Hospital in Middleton N.S. 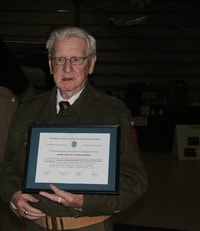 92 year old Gunner Steve Larkin RCA is presented with his certificate of Honorary Membership into the Association at the Association's Christmas in Ortona Dinner held 30 December 2011. Gunner Larkin joined the Canadian Reserves in 1936. Gunner Larkin served for three years in Anti-Aircraft Batteries in England before being shipped to Italy with the 3rd Field Battery RCA, 1st Canadian Division. Serving for eight months in Italy Gunner Larkin was severely wounded by German shell fire outside Rimini in August 1944. Gunner Larkin spent the next three years in hospital. When he was finally discharged from the Army he had only a web belt and two pictures for possessions, his uniform being lost overseas. The Association furnished him a complete uniform, including wound stripe, from Association stores which he may now consider his own. If anyone deserves to wear the uniform, he does. 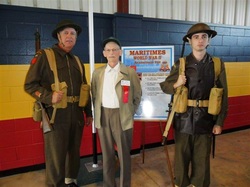 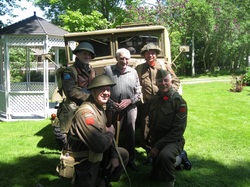 Members of the Association have their Photograph taken with Private Alexander Emslie at the Cumberland County Museum, June 2011. Private Emslie joined the West Nova Scotia Regiment 9th May, 1940. Later transferring to the North Nova Scotia Highlanders, Private Emslie went overseas in 1941 where he served as a sniper in North West Europe. 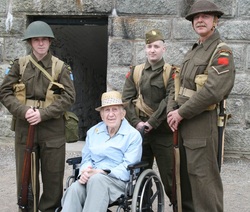 Members of the Association pose for a picture with a Veteran of the North Nova Scotia Highlanders at the Citadel Hill encampment June 2011.